Hope you and your families are doing well in these uncertain times. We are approaching Christmas and we would like to invite you to our pre Christmas celebrations.

Hope you all had a nice break. Life is very different from what we were used to and our last term of the school year 2019-2020 finished without the traditional celebrations, multicultural dinner, paella rally…

I am so pleased with how everyone adapted to lessons online back in March and how students are asking for more online provision that suits them at any location.

This summer new activities were on offer. Alessandra took us on a tour of Italy, with culture, history and real Italian cooking.

With Elena a few “peregrinos” did the camino challenge where walks and cultural challenges were added weekly. The feedback has been fantastic, therefore we are looking into our next cultural activities. Backstage tutors are preparing cultural activities to add to our weekly provision.

The new normal has brought a new dimension to our little language centre and our students are learning languages and culture as well as technology. I know, sometimes it is a very challenging combination but we are here to learn together and to support each other at good times and bad.

This Autumn will be challenging as the days will draw in and everyone will stay at home as much as possible but tutors as much as students will be looking forward to our weekly meeting.

If you have not booked, please follow the link to do it. If you have done it, thank you very much.

We are offering new courses for total beginners… Do you know anyone interested? Please pass our contact around!

We will contact you next week confirming your course, etc….

Please if you have any queries let me know,

Thanks you and see you soon,

It has been the first time Bedford Language Centre has covered this topic. Carnival, the time of the year to party before lent, is well celebrated in a lot of countries in Europe. In Germany it is celebrated wherever the Catholic  faith is kept . The Nice carnival in France lasts for 3 weeks. In Italy each mask is linked to a town. In mainland Spain the Cadiz carnival has been going for centuries. Without doubt the best known Carnivals in Europe are Venezia in Italy and Santa Cruz de Tererife, the biggest after Rio in the world.  Alessandra gave us a very interested presentation. We also learned  about different dishes in different cities and of course we had a great time and sampled delicious food. Can’t wait for the next year! Thank you to everyone who helped on the day and to everyone who wore flowers and masks.

Bedford Language Centre, as supporters of learning Chinese and the culture went along to London to see the festivities. We got to see the parade from Trafalgar Square to Shaftsbury Avenue.

Later there were Lion and Dragon dances in Trafalgar Square.

We tried the street food…

…and acquired a lucky dragon.

A good day out!

Navarra is one of the oldest of the kingdoms that make up Spain. It has a wonderful mix of history and nature, not to forget the food. Just before New Year, BLC spent a few cold days in a foggy Navarra to inspect the area and scout out the Bodegas.

Foz Arbayun is the biggest gorge in Navarra. A great introduction to the Spanish Pyrenees, it will stay on the itinerary, with some spectacular scenery and “buitres Leonado”.

The area is home to a number of monasteries and classic Romanic churches. Having looked at a number of these, a trip to the foothills of the Pyrenees led to a combination of the two. A night in the monastery of Leyre, known for its services with Gregorian chants. This will give the opportunity to listen to these in both an evening and a morning service.

The area also has unspoilt medieval hilltop towns such as Ujue with its beautiful church and views of the Pyrenees.

The plan is also to fit in a visit to Pamplona, famous for its bull running. Here you can follow the route the bulls take, or have a coffee in the cafe frequented by Hemingway. As always there is more, such as the fortifications and the bars with the typical pintxos.

And so to Olite. This was the main residence of the kings of Navarra. The palace is notable for the several towers. Apparently there are views. In December the fog hid these! With its small unspoilt medieval centre Olite is a pleasant place to pass the time. We investigated some Bodegas to find one for a tasting but even the losers in this competition have wines that are worth trying and can be found both in the town’s bars and restaurants as well as in the bodegas and their associated shops.

We don’t only think about wine! The nearby area of the Roncal Valley is famous for its cheese, Ujue is known for its caramelized almonds and we also found a seller of local honeys.

A visit to the Bardenas Reales, one of Spain’s deserts, showed it to be interesting but  we will leave it for another trip as this won’t be the best time of year to visit.

Lots to investigate, great people to talk with!

Just back from Cadiz, Spain, the area where sherry is produced. What a privilege to take some of our Spanish students on this cultural immersion. A joy for the wine lovers, history lovers and culture lovers

Sherry, we called it Jerez in Spain is a fortified wine only produced in this part of Spain, the Sherry triangle, and covers the towns of Jerez de la Frontera, Puerto de SantaMaria & Sanlucar de Barrameda.

This time we stayed in a lovely converted convent, Monasterio de San Miguel in Puerto de Santa Maria. A place full history, this is an excellent base to explore the area.

To learn more about sherry visiting a couple of bodegas is a must. To really appreciate it, one has to taste the different wines, fino, oloroso, Pedro Ximenez just to mention a few, as well as my favourite one, Palo cortado.

This area of Spain is well known for their Andalusian horses. A horse riding performance is only possible to watch in Jerez and Vienna. We did not only go to a performance but went on a “calesa” (carriage) ride.

Cadiz, claimed to be the oldest city in Western Europe, was reached by ferry from El Puerto.

A culture pot, Founded by the Phoenicians, every other civilisation helped to shape this city full of character, light, sun and welcoming people.

In Sevilla with our fantastic guides Emma and Aidan we moved to the times of Jews and Moors living together. At Los Reales Alcazares palace Christian traditions and Moorish architecture get put together. This mixture of cultures could be found in a lot of aspects of Spanish life, and a good example is in the Spanish cuisine that we sampled on numerous occasions.

What a fantastic experience! Thank you everyone for making this trip so special!!

Thank you to the tutors for their time and cooking & baking and all the students. We got £185 for cancer research and cancer support. 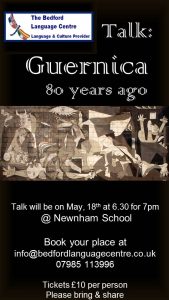 The Bedford Language Centre organised a Double Presentation and Social to mark the 80th anniversary of the bombing of Guernica, on 26th April 1937.  This merciless destruction of the Basque town of Guernica by the Luftwaffe, at the behest of Franco, was also an attack on the  symbolic home of Spanish democracy, and inspired Pablo Picasso  to paint his famous anti-war masterpiece.

The opening presentation by Frank Livesey gave a fascinating exploration of the historic background to the Spanish Civil War, and after a Spanish buffet, the audience were treated to a detailed interpretation by Victor Sanchez of the meaning of Picasso’s work of art.  Both talks included a question and answer session, and during the interval the mixed Spanish and English audience enjoyed a lively discussion.

“What a fascinating pair of presentations, which opened my eyes to so many aspects of Spanish culture. It was also a very social evening, and I enjoyed talking to several very interesting people.” Teresa Moon 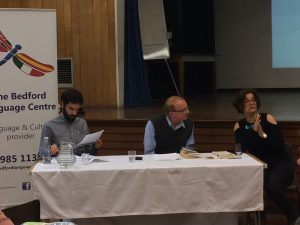 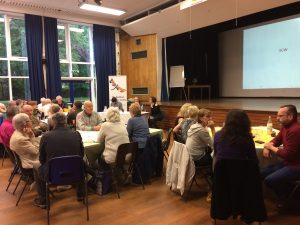 We wish everyone a lovely mother’s day in the UK. In different countries this day is celebrated on different days.

Our trip to Cádiz

BLC has run trips to Madrid where the emphasis has been to learn about Spanish everyday life & speak Spanish while living with Spanish families. We think that now is the time to try something a bit different, to show the culture of a different area. With this idea BLC went on an arduous exploration of some of the places around Jerez to see if this could be a popular destination. 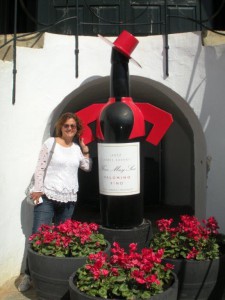 We tried to remember that there is more to Jerez than sherry and visited the Alcázar, the Moorish palace. Not so well preserved as the Alhambra of Granada or Los Alcázares of Seville, it is still interesting, with information about olive oil pressing and the moorish baths.

Another stopping point was Sanlúcar, the starting point for Columbus and Magallanes. San Lúcar is the D.O. for Manzanilla (not the tea!). Thus we needed to visit the Barbadillo Bodega to learn the difference.

Sanlúcar is also the start point for safaris to the Doñana National park. 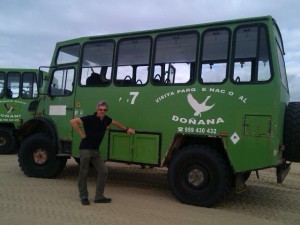 This National park was created in 1969 and it is one of Europe’s most important wetland reserves and a major site for migrating birds. It is an immense area; the parque itself and surrounding parque natural or Entorno de Doñana. The trip involves a crossing of the Guadarquivir river. There is the chance to see animals on the river’s edge as the boat travels upstream to the landing point.The tour shows the different ecosystems. The driver gave a good commentary with interesting anecdotes and hi 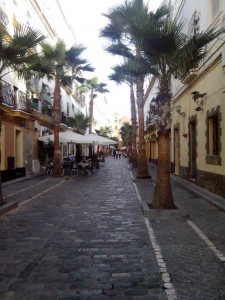 The region is also famous for its “pueblos blancos”. We visited one to see how these are. Arcos de La Frontera, like Jerez was a border town at the time of the expulsion of the Moorish empire. This is a town of narrow streets, cobbles and steep roads. With picturesque houses and magnificent views.

An important Spanish Naval city from the days of sail, Cádiz is on a promontery with the old town filling the end.
There is so much History in this area! Definitely we have to go back to find out more about the History and wine!